This morning we went out to the barn to find that Clover was in labour, after being two days overdue! We were able to capture the entire thing on camera, as it had just begun. Believe it or not, this is the first kidding we have been able to attend from start to finish. We usually walked in as the kid was halfway out or already born.

After about half an hour of assisting the birth, Clover had produced a beautiful baby boy. She immediately took to it and it was obvious she had inherited her mother’s instincts. As much as we all thought she would not make an excellent mother (Clover is very scatterbrained and…flighty), she proved us wrong.

This little buckling weighed in at about seven pounds and was the only kid in the birth. He was very light coloured and even sported random white hairs all over his body, giving him a frosted look. Thankfully he will grow out of that as he ages. This beautiful buckling is sired by Ran-cher Acres Alchemy’s Peter, and is our last kid born for the 2015 season.

Below are a couple of pictures from the birth.

UPDATE: After about two weeks of deciding, Clover’s buckling was officially named “Summer Young Placide”. Placide means calm. He is a very quiet and composed kid, making the name a perfect fit for him. 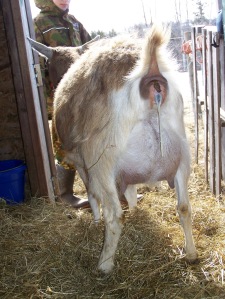 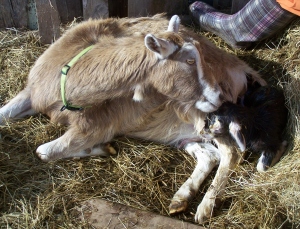