Clover in 3rd place in the Toggenburg Dry Yearling Class. It was very close between her and the 2nd place doe.

This year we entered the Goat Association of Nova Scotia’s Summer Classic Open Doe Show for a second time. The show took place on August 21, 2013 at the Nova Scotia Provincial Exhibition in Bible Hill, and was judged by James Bennett. This particular show was an official Canadian Goat Society (CGS) Sanctioned show. Sam decided she would again take her first and most favourite goat, Rocky Mount Loot Spirit (Spirit) as a milking doe entry, and her new dry yearling, Tip Top Cocoa Cream (Clover). This was just the second time that the Summer Young name was going to be hung from the rails of Sam’s goat pen at a show. The day before the show she spent all day bathing the goats and touching up their coats with pocket clippers. Sam did her best work for this show because she knew it was the biggest one she was competing in this year and that there was a lot of difficult competition. Goat breeders from all over Nova Scotia and New Brunswick came to this show every year, making it a very diverse show with lots of different breeds of goats. 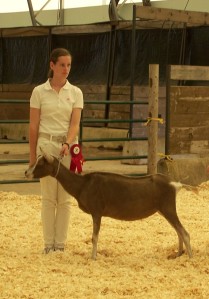 Once again, the goats were loaded into the back of the family Ford station wagon and driven to the show grounds for 10am. The show was not scheduled to start until 1pm, but the goats needed to be in place before then so that vet checks and registration could be done. Time passed very quickly between the time we arrived and the time the show actually started, unlike last year when those three hours seemed to have been dragging by. Showing began at a little after one, starting with the Alpine classes. Next was a small LaMancha section of classes, and then came the Toggenburgs. Clover was registered in the Toggenburg Dry Yearling class, and after the judge’s careful consideration, received a 3rd place in her first ever open show. After the Toggenburg classes finished, there were Recorded Grade classes and Specialty Herd classes. We didn’t compete in any of those.

Spirit was not registered in the Toggenburg milking classes because she does not yet have any papers to prove she is 100% purebred, and is not tattooed. Next year she will hopefully be able to compete in these classes, after we get caught up on our paperwork in the fall. Spirit was, however, able to compete in the unrecorded portion of the show after all of the registered goats were judged. In the class of Unrecorded 2 & 3 Year Old Milkers, Spirit placed 1st. This also meant she was able to compete in the Senior Championship class against all of the other unrecorded milking does. In that class, Spirit earned Senior Unrecorded Breed Champion. Now because she had been awarded that, Spirit qualified for the Grand Champion Unrecorded Breed class. Unfortunately, she did lost out to two dry does that were awarded Grand Champion and Reserve Grand Champion. Spirit’s conformation classes went great though, and we are very proud of her!

Junior Showmanship Class. Sam in 2nd place and Charlie in 5th place at the far right in the back row.

At the GANS Summer Classic there are always Peewee Showmanship, Junior Showmanship and Open Showmanship classes. Sam entered the Junior Showmanship class for exhibitors aged 15 and under, and so did her little brother, Charlie. Sam took Spirit in and Charlie chose to show Clover. In total, there were ten entries in this class, most of which were 4-H kids. After the judge went around and asked scorecard questions and viewed how well they handled and set up the goats, the large class was placed. In Sam’s last year of competing in this class, she placed 2nd and was awarded a pink bucket. In Charlie first year of entering this class, he placed 5th and chose the prize of Mane N Tail Shampoo.

Overall, it was a very successful show day and an excellent way to wrap up Summer Young’s official first show season. Next year we hope to have at least five goats entered in this show, including Spirit, Clover, Dancer, Trinity and a doeling that one of our milkers will award us with next spring.