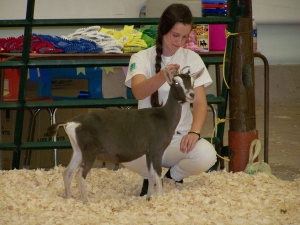 Today we made our last goat purchase of 2014. This precious little doe’s name is Tip Top Samson Sigma, and she’s a seven month old doeling sired by Eramosa’s Samson. END_OF_DOCUMENT_TOKEN_TO_BE_REPLACED 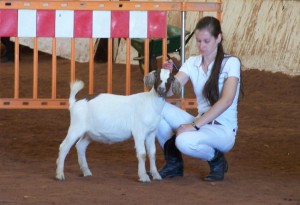 MG and Sam in the Chevon class

The Nova Scotia Provincial 4-H Show is the biggest organized 4-h show across Canada, and this year, we got to be a part of it. It was held in Bible Hill, NS, at the Provincial Exhibition grounds. This is also where the GANS Summer Classic is held every August. This show ran from Friday, September 26 to Sunday, September 28, 2014. To compete at Pro Show, you need to have won Champion, Reserve Champion, first and/or second place in your class at the county level exhibition on 4-H Day. END_OF_DOCUMENT_TOKEN_TO_BE_REPLACED

Oreo and Sigma in the Dam and Daughter class

With all of the same Triple RT Farms goats from the week before, plus one, and a few Toggenburgs, we set out to our 3rd GANS Summer Classic in Bible Hill, NS. After six days straight of running back and forth to Musquodoboit for the Halifax County Exhibition, a single day show was something to look forward to. END_OF_DOCUMENT_TOKEN_TO_BE_REPLACED 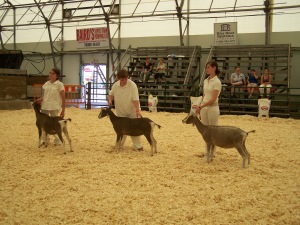 Clover in 3rd place in the Toggenburg Dry Yearling Class. It was very close between her and the 2nd place doe.

This year we entered the Goat Association of Nova Scotia’s Summer Classic Open Doe Show for a second time. The show took place on August 21, 2013 at the Nova Scotia Provincial Exhibition in Bible Hill, and was judged by James Bennett. This particular show was an official Canadian Goat Society (CGS) Sanctioned show. Sam decided she would again take her first and most favourite goat, Rocky Mount Loot Spirit (Spirit) as a milking doe entry, and her new dry yearling, Tip Top Cocoa Cream (Clover). This was just the second time that the Summer Young name was going to be hung from the rails of Sam’s goat pen at a show. The day before the show she spent all day bathing the goats and touching up their coats with pocket clippers. Sam did her best work for this show because she knew it was the biggest one she was competing in this year and that there was a lot of difficult competition. Goat breeders from all over Nova Scotia and New Brunswick came to this show every year, making it a very diverse show with lots of different breeds of goats.

END_OF_DOCUMENT_TOKEN_TO_BE_REPLACED 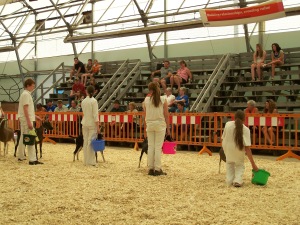 Sam (holding blue bucket) gets 3rd in Junior Showmanship. Spirit can be seen on the far left.

We may be a relatively new goat place in Nova Scotia, but we certainly know how important it is to be noticed and to get yourself known. Back in August of 2012, Sam Smith (Summer Young’s owner) decided she would try to show goats. So, she found a local show and entered her first doe, Rocky Mount Loot Spirit.

Let’s face it; Sam really didn’t know much about showing goats. She had only ever shown horses, so she figured it had to be similar to that. Sam had watched the 2011 goat show at the provincial exhibition in Truro the year before, but had only learned that the goats had to stand so that the front feet were together and the back feet were slightly spread apart. This was not a lot of information, so she then took to YouTube, where most was told. After watching about two hours worth of videos, Sam was a little more confident in herself.